Alexandra Karacostas is a professional astrologer based in northern California. With decades of experience as a consultant, she offers practical wisdom, insight and compassion to help people successfully navigate their lives. An avid student of astrology since 1975, she has been practicing professionally since 1984. Alexandra teaches and lectures nationally and abroad and serves an international clientele. In 1989 she co-founded Syn-Sig, a Special Interest Group for Relationships.

Alexandra has served on the board of directors of the Organization for Professional Astrology (OPA) since 2007, as President between 2010-2014, and continues to serve on their educational board. Alexandra is involved in various astrological organizations and is an editor for International Society for Astrological Research (ISAR) and Astrology News Service (ANS). She has been published in various astrological magazines, and has written chapters for two books, The Professional Astrologer and the new Essential Astrology coming out soon. 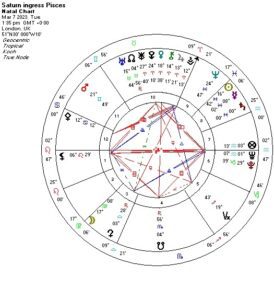 In its ingress into Pisces in March 2023, Saturn will be accompanied by an entourage of planets. The particular cast of planets creates a distinctive backdrop, where the players join the act and express their traits, often alternating turns as they orbit the Sun and shift relative positions. This time, the ingress chart shows Saturn sandwiched between Pluto at 29° Capricorn and Neptune at 24° Pisces. Symbolically, these are powerful agents of transformation and change, especially as they are found in the latter degrees of their respective signs, signifying endings. The T-square between Sun and Neptune in Pisces, opposing the Virgo Full Moon, squaring Mars in Gemini, advocates for resolution, though ignited perhaps by ideological conflict.

One of the fish swims toward the mundane existence of life, while the other swims towards spirit and the cosmic collective.

Pisces’ symbol is two fish swimming in opposite directions. One of the fish swims toward the mundane existence of life, while the other swims towards spirit and the cosmic collective. Pisces is more practical than often credited, but equally otherworldly. There are three manifestations that offer insight into this last sign of the zodiac: that of the artist/dancer/poet, the mystic, and the substance abuser/addict. What all three have in common is that they involve, consciously or not, unification with the sacred and divine.

Pisces rules the feet, which support the entire mass of the body.

Every sign offers gifts, its own lessons. Pisces is about establishment of healthy boundaries, connection with the divine, and the wholeness of life shared by all sentient beings. Piscean energy is ultra-sensitive, acutely influenced by the subconscious, feeling everything in its surrounds. Dreams, imagination, spirituality, compassion, delusion, film/images, all mind intoxicating substances, and escape, all belong to the Piscean domain. There exists a close relationship to Christianity, sharing the same symbol of the fish, the Age of Pisces, the messages of martyrdom, unconditional love, suffering and self-sacrifice. Understanding and acceptance are key to alignment. Pisces rules the feet, which support the entire mass of the body. The suffering of others, somehow feeling responsible, and desire to be of greater service, are elements to the theme. As the last sign of the natural zodiac, Pisces embodies endings in preparation for a new cycle of experience, articulating the Alpha-Omega of existence.

When a planet first enters a sign, we experience a jolt as the quality of energy morphs. During the middle degrees we learn to constructively cope. In the last degrees there is a peak and a measure of resolve.

Courage, effort and discipline will be necessary to ground the situation, to counter the irrational fears, confusion, and disillusion arising from the oceans of our collective psyche and anguish.

So how might Saturn’s qualities manifest in Pisces? Because of the inherent lack of structure in Pisces, Saturn may initially fear loss of control, like it is tripping into some chaotic abyss. It is a time for reexamination of religion and spirituality, a time of greater conflict regarding beliefs, morals and associated behaviors and concerns. Courage, effort and discipline will be necessary to ground the situation, to counter the irrational fears, confusion, and disillusion arising from the oceans of our collective psyche and anguish. My colleague and friend, Jacqueline Janes, describes the big picture as “getting our sea legs on”, as if we’re in the deep ocean on an oil rig anchored to the sea floor, working to gain balance in the deep currents of the turbulent environment.

Speaking of water, Saturn’s passage through Pisces will likely bring even greater attention on the issue of clean water. The pharmaceutical industry may also play prominently. We will strive to collectively address mental health, addiction and spiritual purpose. We reach a broader understanding and acceptance of our common experience and needs, compelling us toward behaviors and actions reflecting hopes and dreams. Saturn demands concrete, visible results. Our natural environment, global and social conditions which bind us together, help us recognize our wholeness, part of Piscean territories. Pisces seeks unity and connection above all. Faith is vital as we navigate the path forward. In Pisces, it may well be stormy and precarious in the powerful, deep currents of life’s oceans.

In January 2025, Saturn catches up to Neptune in the 29th degrees of Pisces. Our collective suffering and pain are intended to encourage willingness to try remedies we have yet to imagine.

Saturn in Pisces endeavors to make order out of the unfolding, unruly circumstances of the times. There is a longing for common ground, and a reliance on faith, in an environment conducive to the sharing of dreams, hopes, and fears. New social structures, material and spiritual reorganization, and accountability feature prominently in achieving the objective of this placement. It is a collective journey that we take together.

Saturn in Pisces can help us heal spiritually, fostering faith instead of fear.

As we confront climate change, globalization, and issues that affect humanity across the planet, the Saturn in Pisces backdrop empowers the intentional planting of seeds that can benefit everyone, not just the few. Religion and spirituality can sync more closely, addressing the common pain, instead of exacerbating conditions that cause suffering. Saturn in Pisces can help us heal spiritually, fostering faith instead of fear. We recognize our commonality as members of the human race. We all have need for shelter, clean water, air, food, safety, and love. It is with an attitude of humility, responsibility, self-respect, and faith, carried out in conscious intention, that we find the path to growth and fruition.

The last three dates of Saturn’s tenure in Pisces are:

These are a few, interesting examples illustrating how Saturn’s limits can be stretched, venturing into cosmic, uncharted, unmapped and imaginative territory, results be damned, Piscean style.

These were remarkable times still remembered by so many of us. Out of a plethora of momentous events, here are a few listed. One of the important and unique features about the 1960s, was the rare occurrence of Uranus and Pluto in Virgo, making a series of oppositions to Saturn in Pisces. The push against authority, added impetus to pass some ground-breaking legislation.

Two famous people with Saturn in Pisces are: 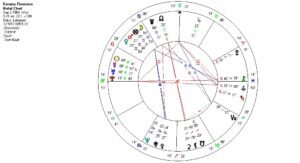 The Saturn-Pisces aspect is well illustrated in the natal chart of Keanu Reeves. A Canadian actor, and deeply spiritual philanthropist, his philosophy is expressed through numerous quotes, such as “If you have been brutally broken, but still have the courage to be gentle to other human beings, then you are a bad-ass with the heart of an angel.” And, “Energy can’t be created or destroyed. Energy flows. It must be in a direction, with some internal, emotive, spiritual direction. It must have some effect somewhere”. 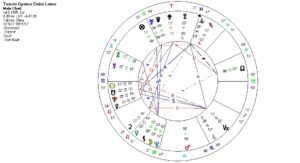 The Saturn-Pisces aspect is uniquely illustrated by the natal chart of His Holiness the 14th Dalai Lama, born in Tibet in 1935. At the age of 15 he became the spiritual leader of the Tibetan Buddhist traditions, and the temporal head of the Tibetan people. He is a universal symbol of wisdom, compassion, peace, and social and political leadership. As an activist, he founded many institutions promoting educational, cultural, economic, and spiritual advancement.

END_OF_DOCUMENT_TOKEN_TO_BE_REPLACED

You and your Kid – Λέων

END_OF_DOCUMENT_TOKEN_TO_BE_REPLACED

This website uses cookies to improve your experience while you navigate through the website. Out of these, the cookies that are categorized as necessary are stored on your browser as they are essential for the working of basic functionalities of the website. We also use third-party cookies that help us analyze and understand how you use this website. These cookies will be stored in your browser only with your consent. You also have the option to opt-out of these cookies. But opting out of some of these cookies may affect your browsing experience.
Necessary Always Enabled
Necessary cookies are absolutely essential for the website to function properly. This category only includes cookies that ensures basic functionalities and security features of the website. These cookies do not store any personal information.
Non-necessary
Any cookies that may not be particularly necessary for the website to function and is used specifically to collect user personal data via analytics, ads, other embedded contents are termed as non-necessary cookies. It is mandatory to procure user consent prior to running these cookies on your website.
SAVE & ACCEPT